Current Specials!
Login or register
We wish you a lovely Holiday and a prosperous 2022! Thank you for sharing another year with us.
Sorry we are closed from 23 Dec 2021 until 5 January 2022. 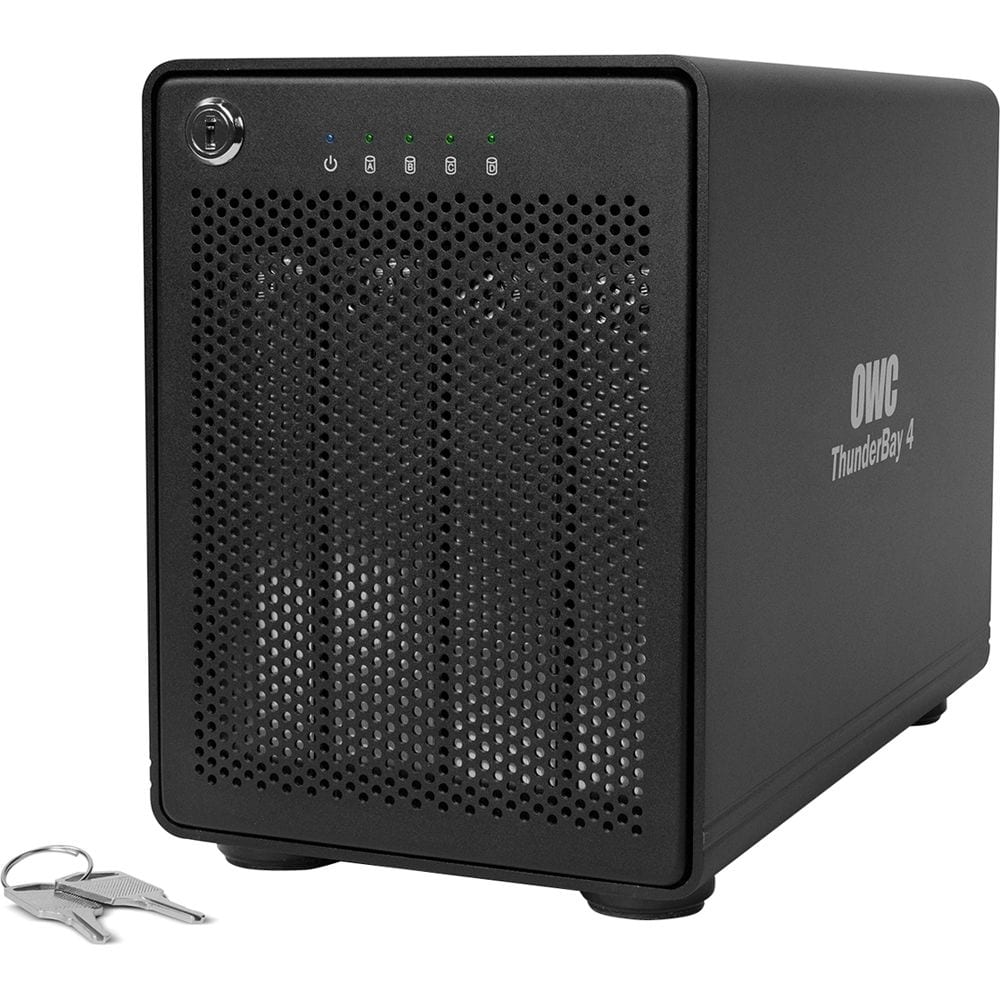 
Add the capabilities of Thunderbolt 2 speed and storage to your Mac with the ThunderBay 4 Four-Bay Thunderbolt 2 RAID Array (RAID 5 Edition) from OWC / Other World Computing. This is a four bay, SATA III 6 Gb/s enclosure and each bay will support a 3.5" hard drive or a 2.5" hard drive or SSD. Each 2.5" drive requires an optional NewerTech AdaptaDrive adapter. Once drives are installed, you can RAID them via the included SoftRAID 5 for Thunderbay software. While this array is pre-configured as RAID 5, it also supports RAID 0, 1, 4, and 1+0. For those who do not require RAID support, this array may also be configured as a JBOD.

The ThunderBay 4 comes with two Thunderbolt 2 ports that provide bi-directional data transfer rates of 20 Gb/s. Dual Thunderbolt 2 ports allow you to daisy-chain up to six devices such as additional ThunderBays, 4K displays, and more. To help ensure a smooth operating environment, the array uses a 92mm nosie-quieting fan.

The ThunderBay 4 is compatible with Mac OS 10.9 and later. It may be used as a boot drive, but does not support Boot Camp and operates using a 100-240 VAC power supply that runs at 50/60 Hz. Included with this ThunderBay 4 array is SoftRAID 5 for Thunderbay, a 3.3' / 1.0m Thunderbolt cable, an 3-prong power cable, 2 keys for the front panel lock, and a Mac compatible software bundle.

Please bear in mind that while users are free to select drives of their choice for this RAID, variable spin drives, such as WD Red and WD Green, are not recommended. The issue with variable spin drives is that because the drives could potentially be spinning at different speeds, this could lead to constant rebuilds within the RAID, as it could think that one or more drives are not in operation. While WD Red and WD Green drives are specifically being mentioned, please bear in mind that variable speed drives also manufactured by other companies, such as Seagate, are also not recommended.

Images are for illusrative purposes, actual product may differ from image

Get it now, and pay R937.65 per month with Mobicred
In stock

Get it now, and pay R1,008.23 per month with Mobicred
Unavailable
Add to basket
Full Kit Touch screen point...

Get it now, and pay R806.56 per month with Mobicred
In stock

Be the first to get deals